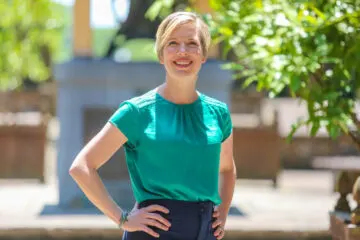 By Greg Oliver
Photo by Caleb Gilbert | The Journal

CLEMSON — Clemson resident Claiborne Linvill feels Pickens County has come a long way in her 15 years as a resident.

The desire to see progress continue is one of the reasons why she is running for the District 1 seat on Pickens County Council in the November general election.

Linvill, a Democrat, and Brad White, a Republican, both ran unopposed in their primaries. The winner will succeed two-term councilman Ensley Feemster, who decided against running for a third term, in representing the Clemson area starting in January.

“I want to make sure we keep moving forward and don’t take any steps back,” Linvill said. “It’s time to start talking big vision, what we could be doing here, as well as partnerships. Our cities are growing, such as Clemson and Easley, and our other cities have a lot going on for them. We have some incredible nonprofits in the area that are doing so much work for our more vulnerable neighborhoods and citizens, and we need to be working together to solve some of the big problems that are hitting us.”

Problems Linvill listed include affordable housing, transportation and the economy.

“County council needs to be foremost about having a vision and communicating that to people,” she said.

Strong voice at the county level

Linvill, who previously worked at the South Carolina Botanical Garden, said she feels that Clemson needs a strong voice on county council — speaking up for the city’s quality of life and its role in the county. One of the first things Linvill feels the new council must address is the comprehensive plan.

Linvill understands the relationship between Clemson and the rest of the county has been less than ideal historically, but feels there has been improvement.

“Amazingly, while federal politics have gotten more polarizing, in local politics we all are really trying to work together to make this a better place to live,” she said. “I’ve seen a very positive, forward district.

“So I think we all have to work together and get over that animosity that’s been here in the past and all move forward collectively when we’re talking about major issues like transportation and where development is going to take place. Clemson can’t be ignored — we have to be an integral part of the conversation.”

When it comes to traffic, Linvill said the county won’t be able to dramatically improve U.S. Highway 123 since it isn’t a county road. But she said Pickens County must play a major role in decisions made on routing traffic through Clemson.

As to the millage increase council passed last year after the South Carolina Supreme Court deemed the $20 road maintenance fee the county collected for nearly 20 years was illegal, Linvill said repairing roads is costly but necessary.

“Most people will save money on their cars, because when you have better roads, you have less impact on your car. Most people aren’t going to feel a lot of it in their pockets, and I think that’s part of our communication issue as well.”

Linvill also feels Pickens County “has been overlooked too long” as a major tourism destination.

“A lot of signage went up in the last few years, and it’s made a huge difference,” Linvill said. “It’s beautiful to live here, and I think we have so many opportunities for tourism. People want to be out hiking, they want to be out walking, they want to be fishing in ponds. I think tourism dollars just totally results in an economic boon in Pickens County, and a little bit of spending can go a long way to getting those dollars to stay here.”

This article is available online here for subscribers.